When you read the ancient and scholarly texts having to do with ancient Hellas, you will often come upon references to 'honey cakes' or 'cakes' in general. We might be tempted to interpret these to mean modern day cakes, but the ancient Hellenes would have most likely used flat cracker-type 'cakes', made from barley meal and honey. They were shaped to resemble animal or objects when the occasion called for it. unfortunately, no ancient recipe from Hellas has survived; perhaps because these cakes were known to all and passed down from mother to daughter from an early age. There was perhaps no need to write the recipe down at all.

My good friend Robert Clark recently sent me a recipe by Julius Pollux, who lived in the 2nd century CE. He was an Alexandrian grammarian and sophist who taught at Athens, where he was appointed professor of rhetoric at the Academy by the emperor Commodus. Pollux was the author of the Onomasticon, a Greek thesaurus or dictionary of Attic synonyms and phrases, arranged not alphabetically but according to subject-matter, in ten books. It supplies in passing much rare and valuable information on many points of classical antiquity— objects in daily life, the theatre, politics and quotes numerous fragments of lost works.

Pollux describes a variety of flat cakes that did not match the recipes we know for cakes in ancient Rome, as these often included cottage cheese. This recipe is simpler, much more basic, and might have been Hellenic in origin. The recipe cold have been exotic enough for the ancient Romans for Pollux to include it in his writings.

Honey cakes were a staple of Noumenia sacrifices, and help grant authenticity to your Noumenia rituals. I made my first batch yesterday, and I would like o share the recipe and results with you. The recipe was found here.
Ingredients
200 g barley flour
100 ml water
3 tbsp clear honey
2 tbsp olive oil 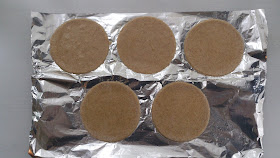 Place the flour in a bowl, add the honey and olive oil and mix. Pour in the water little by little and continue mixing until a good dough is formed. Cool this in the fridge for about then minutes. I have found that using a quarter less water makes a better dough. 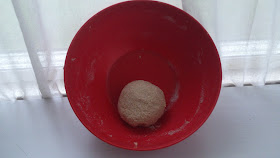 Tip the ball of dough onto a floured surface and roll out as thinly as possible. Use a pastry cutter to cut the dough and place the rounds on a greased baking tray. 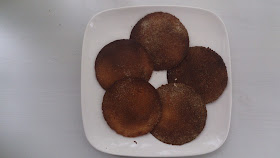 The original recipe says to bake the cakes in an oven pre-heated to 200°C for about 15 minutes. I would suggest no more than twelve minutes, and will follow my own advice next time.
Transfer the cakes to a wire rack, cool and sacrifice. If you have made too many, save them in an air-tight container. The advantage of honey is not just its sweet taste, but its ability to keep pastry fresh for a long time, as it is an excellent liquid absorbent.